COOPOLIS: Innovation in the Social Economy in Barcelona 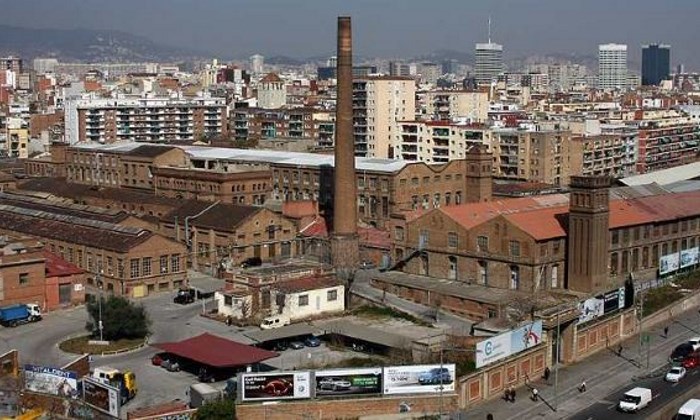 Coopolis is an equipment of 4,000 m2 in block 4 of the old factory of Can Batlló in the Sants-Barcelona neighborhood, which belongs to the City Council and which has given a session of use to the social movement and the Social and Solidarity Economy ( l’ESS) of the District of Sants-Montjuic-Barcelona for the promotion of l’ESS in the city. La Col architecture cooperative has been responsible for the rehabilitation of this space.

The Coopolis initiative stems from the community and cooperative world of the Sants neighborhood, where La Ciutat Invisible, La Col, and the Can Batlló assembly have played a leading role. Coopolis is organized and managed from the community, is a coworking space for newly created social enterprises and consolidated experiences, offers training on cooperativism, l’ESS, and on business management with criteria of l’ESS; It also offers technical support for entrepreneurship and financing services, joint promotion and intercooperation. It has been in operation since 2017.

As of 2009, Catalonia and Spain were living the social mobilization called 15M against the government’s policies of cuts to health, education and other social services. In the Sants neighborhood in Barcelona, ​​the mobilization of the indignant of 15M picked up the trajectory of the social and cooperative movements of the neighborhood.

In parallel, the Federation of Treball Cooperatives of Catalonia financed the Barri Cooperatiu project that executed the Invisible City from 2009 to 2013. This project aimed to recover the historical memory of the cooperative in the Barrio de Sants that was emblematic since the middle of the 19th century. until the entrance of the Franco regime, and open spaces for information and debate on cooperative and l’ESS practices to promote cooperativism in the Sants neighborhood.

Likewise, the XES (Xarxa d’economia solidària) created in 2003, was strengthening with new economic initiatives and territorial intercooperation processes in regions of Catalonia and neighborhoods of Barcelona. In 2010, the XES organized a course and seminar on l’ESS in the Sants neighborhood. In 2011, Coop57 held the state meeting in the Sants neighborhood, which enriched the eyes of people and entities interested in L’ESS. In 2012 there were different talks about l’ESS to Can Batlló.

In Can Batlló, the neighborhood and social movement of Sants rehabilitated equipment spaces and created the following initiatives: the Josep Pons Popular Library, the bar and meeting space, the auditorium, the climbing wall, the infrastructure workshop that works the metal, the electricity, plumbing and construction; the collective carpentry workshop, the collective printing press, the documentation center, the Nau family space for children from 0 to 6 years old, the arts space, the performing arts and circus training space, the urban garden, the cooperative of agroecological consumption, the beer workshop, the workshop to repair vehicles, various multipurpose rooms for workshops, one of them with kitchen and dining room; the sports area, the dog area; La Borda housing cooperative, Arcadia school, and Coopolis.

Likewise, in the neighborhood new initiatives of l’ESS were created, such as La Col in 2009, Koitton Club in 2012, Kop de Mà in 2013, and then l’Economat Social and Queviure, and strengthening existing initiatives, such as La Ciutat Invisible that was created in 2006.

The economic initiatives of Can Batlló and the entities of l’ESS of the neighborhood, motivated to generate equitable and sustainable socio-economic practices that transform the capitalist economic model, were consolidating the local XES of the Sants-Montjuic District since 2015 and in October of the same year it was formalized with the creation of the Associació per l’impuls de l’Economia Cooperativa i Comunitària de Sants-Montjuic. This formalization was mainly motivated to apply for a Barcelona Activa grant from the Barcelona City Council for the dynamization of l’ESS in the Sants-Montjuic District, a project that lasted from November 2015 to April 2016.

The objectives of the Associació per l’impuls de l’Eduomia Cooperativa i Comunitària de Sants-Montjuic (l’Associació per l’impuls) are: to train on l’ESS, create and consolidate cooperatives in the District of Sants-Montjuic, carry out intercooperation activities, jointly offer and buy products and services jointly, as well as cooperative and community management of public facilities in the District, starting with Coopolis. The Barcelona City Council strengthened the Coopolis project, aligning with measures 3 and 4 of the 14 measures of the XES to promote l’ESS at the local level, which propose to the Town Halls to provide spaces in the neighborhoods to boost l’ESS, such as Coopolis suggests.

l’Associació per l’impuls is made up of 38 entities that represent a great diversity of sectors: mobility, living, finance and exchange, food, education and parenting, communication and Tic, culture and restoration; and that can be classified like this:

Associations like Tatainti: Association space for parenting and respectful education.

Community gardens such as Illa 3 horts: Font de la Guatlla (the Can Batlló orchard is classified in Can Batlló).

Intercooperation and dissemination actions of l’ESS that have been developed by the entities that are part of l’Associació per l’Impuls:

During 2015, the driving entities of L’Asociació per l’Impuls were very active in the dynamization of l’ESS in the Sants-Montjuic District and carried out the following activities: (1) mapping of l’ESS in the neighborhood, (2) presentation of the Coopolis project in Can Batlló, (3) training on feminist l’ESS in the Can Batlló Fusteria Workshop, (4) accompaniment in the creation of the Arcàdia Cooperative in Can Batlló, (5) in the cooperative day, realization of a route to visit current cooperatives in the neighborhood and emblematic buildings of cooperative of the past such as l’Empar de L’Obrer and Lleialtat Santsenca, the first, headquarters of the popular Ateneu de Sants and the second in restoration process to be a community equipment of the neighborhood; (6) dissemination of the solidarity economy at the Fiesta Mayor Alternativa de Sants with the presentation of the XES de Sants, and the sale of the craft beer La Bordeta de l’associació d’artesans of the beer of Can Batlló, (7) l’Economat and Zum Zeig have collaborated so that the members of l’Economat have discounts in Zum Zeig and in Zum Zeig promote l’Economat.

Following the formalization of the Associació per l’Impuls in October 2015 and with the support of an active Barcelona grant, the following activities were carried out: (1) training at l’ESS in Can Batlló: cooperative equipment management community, detection of productive and reproductive needs in equipment projects, (2) promotion of the entities that are part of the association and their products and services to promote responsible consumption through the elaboration of 800 “Catàleg Producte Coop” forms and announcements in the local press (3) Making cooperative vermouths one Sunday a month as open spaces to the general public to meet every Sunday an initiative of l’ESS of the District, (4) realization of Jornada de l’ESS in the square Bonet and Moixí with stands of the entities of l’ESS of the neighborhood, community workshops, musical performances, food, round tables of cooperative projects of other bars rivers, and service exchange office; (5) Award of a project of l’ESS of the District of Sants-Montjuic, with the prize Micaela Chalmeta, which includes the technical support and financing of € 3000, (6) Creation of the website of the Association for l’Impuls , (7) monitoring and coordination of the Coopolis project.

In February 2017, l’Asociació per l’impuls won a subsidy from Aracoop to consolidate Coopolis as Ateneu Cooperatiu. From this subsidy that goes until October 2017, and with the help of the XES to give work for 3h a week to a dynamizer of l’ESS in the District, an organizational structure of Coopolis was created, with 6 areas: territorial strengthening, educational centers, communication, administration and management, training and strengthening or creation of cooperative entities.

During this 2017, l’Asociació per l’iImpuls has conducted a workshop to identify the offers and needs of each entity to boost intercooperation. They have also requested a concept from the Ronda Collective to identify the most appropriate legal form to pool products and services, both to buy and to offer.

The challenges of l’Asocaició per l’iImpuls and Coopolis are to link other entities of the District to participate in the promotion of l’ESS, such as neighborhood associations and educational centers; as well as maintain and strengthen the link with the public sector. They also need to create a protocol to derive services and avoid competition.

Some entities that are part of l’impuls, such as La ciutat Invisible, Kop de ma, Koitton club, La Directa, and Aula de Idiomas; They will share a co-work space, which will probably facilitate the creation of new inter-cooperation projects.

Aspects that have favored intercooperation in the Sants neighborhood, the creation of the Associació per l’impuls and Coopolis:

• The historical trajectory of the cooperative movement to the Sants neighborhood.

• The social movement to create decent and sustainable socio-economic practices, mainly formed by associations such as the XES and the Federation of Treball Cooperatives, private entities of l’ESS such as La Ciutat Invisible, La Col and Coop57; and social leaders of the Sants neighborhood like Iván Miró and Lluc de La Col ..

• The citizen’s need to create decent work and socio-economic alternatives that respond to their collective needs, after the economic crisis.

• The existence of a network of entities with common values ​​and desire to transform the socioeconomic model in the same territory.

• The proximity of the initiatives generates that people are known and that there is trust.

What do We do?

Greenevents is a social economy entrepreneurship that designs and organizes Sustainable Experiences in and around Barcelona: Team building with Social and Ecological Positive Impact, Corporate Volunteering, On Site Corporate Social Responsible (CSR) Activities and Sustainable Events.

We understand Sustainability as a participatory process to build an equitable society, with basic socio-economic covered for everyone, where economic impact does not damage the environment.

– The prices do not include IVA.
– We can make your budget according to your needs.
– Booking policy: 50% of payment must be received at least one month in advance; other 50% can be received on the day of event.
– In case of any cancellations justified because of Covid19, and you cancel at least one week prior to the event, we will consider giving you back a percentage of the first payment.
– If it rains, the event will be scheduled for another day.
– If you are a Spanish Company, you can reward some of our team building experiences as training like Poblenou Sustainable Tour or Learn about traditional Fishermen work. You also can reward any of our workshops on organizational strategies, assertive communication or your company’s CSR; or any of our CSR Activities.
– Greenevents has a security protocol to prevent the spread of Covid-19 in our experiences.
– We will ask you to sign a document that states that Greenevents won’t be responsible for any participant that gets Covid-19 after our event.