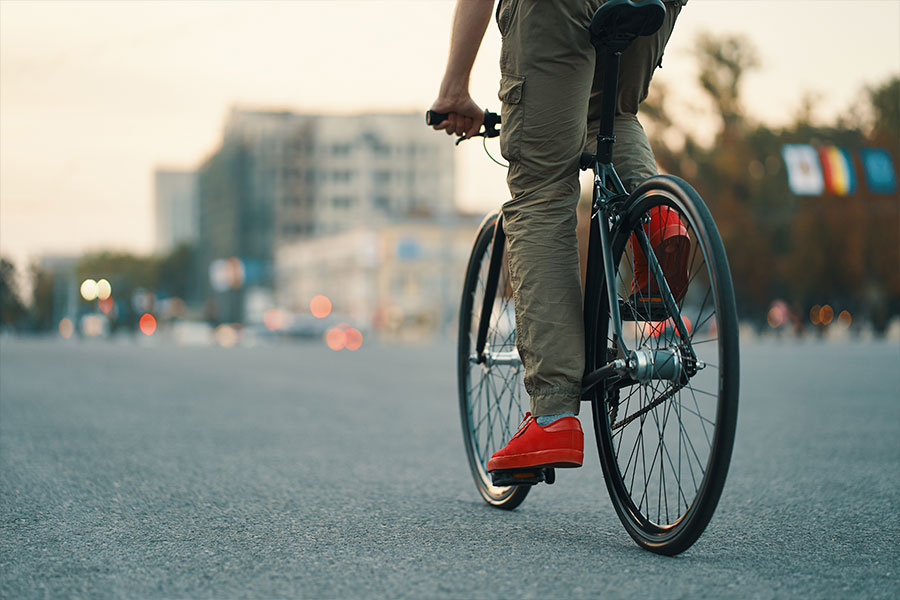 Would you like to know more about the Bike Hub in Barcelona?

The Barcelona City Council’s Social and Solidarity Economy Promotion Plan for 2016-2019 included the rehabilitation of the protected building and property of the Can Picó City Council, which is located on Pere IV street in Poble Nou.  The project was funded through co-financing, and the building stopped being used in 2007 until the municipal space was handed over for use in July 2015 to the Biciclot Cooperative.  The Biciclot Cooperative, known as The Barcelona Bike Hub, is a space dedicated to the social and solidarity economy that supports the socioeconomic dealings of the neighborhood, sustainable mobility, and the promotion of bicycle use. This support from the Barcelona City Council is an example of public-cooperative-community cooperation. The architectural design and monitoring of the work is done by AuBA.

The Biciclot Working Group was born in 1987 from a group that promoted the use of bicycles as a means of transport, which set out to engage the community by offering services and products related to the use of bicycles. This same year, the Biciclot working group presented itself to the public and won the Barcelona City Council “Fès d’alcalde” award.  Wiith the award money, the group was able to buy a fleet of 30 bicycles in order to create a program to promote the use of bicycles within the education sector.  They started a local employment initiative and began offering training in skills such as welding, bicycle frame manufacturing, and business management. They also began to have experience in the organization of tourist bicycle routes.

The award received by the City Council resulted in the creation of the Grup de Treball Biciclot Association in 1988, and the services offered were consolidated: repair and assembly of bikes, organization of bicycle rides for neighborhoods and educational centers, and promoting the use of bikes in schools. The latter, with the support of the Barcelona City Council, is included in the educational reform and “Portem la bicycle a l’escola” (1993-2015) was born, which is a proposal for biking activities for interdisciplinary work in schools that are being offered to date. Biciclot also began to take part in the organization of different events, with the participation of the Barcelona City Council, such as “The Bike Party”, “La Gimcana on Bicyle for Barcelona” (1998), and “The Game on Wheels” ( 1990-2005); the Institut Guttman also took part in the last two events. Biciclot has also participated in similar bike events promoting biking in municipalities near Barcelona. It has also started to take part in different working groups to encouarge the use of bicycles in public institutions such as in the following organizations: Barcelona Civic Commission on Bicycle, The Mobility Pact of Today, and The Bicycle Support Intergroup in the Parliament of Catalonia and in the San Martín District.

In 1993, Biciclot rented a space from an old factory in the Clot neighborhood for their workshop and offices. To minimize the cost of the rental, they came to a cohabitation agreement with Trèvol. Other entities were coming to this new space: Tau Traductors, Casal Self-managing, Bicicletes Solidàries and the BACC (Bicycle Club of Catalonia). Having a shared space with others allowed the creation of new interoperation projects and caused the transformation in 1994 from the association “Grup de treball Biciclot” to the Cooperative of associated work, without motives for profit and of social initiative Biciclot SCCL. Some projects that emerged from this co-working space were: a bar, the Cordada association, the NGO solidarity bicycles to send repaired, unused bicycles to the Polisario Front camps in Algeria, and a second degree cooperative between Biciclot and Trèvol to present and organize the “World Bicycle Messenger Championship” in 1997. These entities do not share spaces with Biciclot currently because some have moved to more central locations or some no longer exist.

Starting in 2005, Bicilot opened a store on the Barceloneta boardwalk where it rents bicycles, offers guided tours, small repairs, and the sale of accessories. In 2009, the REBICICLEM project was created in order to repair abandoned bicycles or take advantage of some of the unused bicycle parts. This project trains people at risk of social and labor exclusion and provides them with employment in bike shops in Barcelona. In 2012, the bike driving courses started and focused on safely and civically driving with an aim towards attracting schools, with the support of different municipalities (Terrasa, San Cugat, Barcelona, ​​Vitòria). In 2013, Biciclot created the VESenBICI service, which unifies the services of guided tours, bike rentals, and a bike school for adults.

To request the transfer of Can Picó for usage,  Biciclot had to present itself to the Barcelona City Council with a social, architectural and financial plan. In July 2015, after two and a half years of negotiation, the Barcelona City Council gave Biciclot the rights to utilize Can Picó for 30 years, with two possible 10-year extensions, and with the commitment of significant investments by Biciclot. On November 14, 2015, Biciclot began the rehabilitation of Can Picó, and they openly invited the people of the neighborhood and the general public to participate in the inauguration of this project. In 2016, the pla d’impuls of the social and solidarity economy (l’ESS) of Barcelona allocated a grant of € 200,000 to complement the financing for the rehabilitation of the first phase of Can Picó: rehabilitation of the Nave (400 m2) ,its loft, and its elevator. The cost for the rehabilitation of this first phase was approximately € 450,000. The rest of the financing came from bicilot’s liquid reserve for € 45,000, new voluntary contributions from Biciclot members for € 30,000, and a loan requested from Coo57 for € 115,000. The first phase was expected to be ready for the second semester of 2017 and thus, The Bike Hub began to function as a space of reference where training, reusing of goods, production, and participation came together within the framework of sustainable mobility and the social and solidarity economy.

The investment planned for the second phase of The Bike Hub, was built between 2017-2019 for € 600,000, and funding was assigned by the Barcelona City Council’s solidarity and social economy promotion plan for 2016-2019. .

The same services that Biciclot offers are provided in The Bike Hub, but The Bike Hub was expanded (the new warehouse will have a capacity for 350 bicycles and the warehouse will have a vehicle loading and unloading area), and new services will be offered such as: ( 1) regulated and non-regulated vocational training in two rooms, each with a capacity of 15 people and the possibility of unifying them. The architectural requirements of these rooms to be able to do formal training have already been approved by the Consoric d’educació de Barcelona and the SOC. Some professional training provided in these rooms will be on mechanics and on safe bicycle mobility for instructors. Bicilot and Impulsem currently have an inter-cooperation agreement that is renewed every year to offer regulated training. (2) there will be a social club with a library and a bar, and a meeting  point will be created for the network of pro-bike entities, offering a space for relationships, associated services, and an observatory that centralizes information on sustainable mobility and bicycles. (3) Also, in The Bike Hub there will be a co-working space in association with EOO-CLERS, a project promoted by Promocions xarxa de coneixements, with a focus on social entrepreneurship, projects for the implementation of sustainable mobility, and assisting in caring for the social management of the neighborhood, with a protegonic role from the Taula Eix Pere IV. This co-working space will have inter-cooperation as a fundamental tool to foster a variety of different ideas, and to form alliances that will reinforce networking between the initiatives of l’ESS, the entities of the neighborhood, and the public administration. (4) There will be a multipurpose auditorium with a capacity of 50 people.

The new space of The Bike Hub will strengthen the work that Biciclot has been doing in its 30 years of existence, and will expand its action towards socio-economic revitalization with a focus on the social and solidarity economy in the Poble Nou neighborhood and in the sector of sustainable mobility. Can Picó is located on Pere IV avenue, which is 3.5 kilometers long; over the next 3 years, more than € 8 million will be invested to start the conversion towards creating a greener and more citizen friendly area. These new features and renovated spaces will become an area for creating projects for neighborhood initiatives that are seeking the reappropriation of their territory with a sustainable foundation; this is a great contrast in comparison to the Project at 22, where large companies, far removed from the needs of the neighborhood, were deciding on the territorial planning of Poble Nou.

It will be an exciting challenge for Biciclot to bring together the associations in The Bike Hub that are participating in the territorial definition of the neighborhood, and lead territorial development in the direction of sustainability, while supporting the l’ESS initiatives. Some of these associations are: the Taula Eix Pere IV, a citizen platform made up of a group of nieghbors, groups and entities in the Poblenou neighborhoods; neighborhood associations such as Salvador Clarós; and the Coordination of Commission for the Project at 22 that is seeking to give the Project at 22 a social dimension of sustainability and innovation made up of the areas of Ecology, Urbanism and Mobility, Business, and Culture and Innovation in the Sant Martí District and by the Fundació Barcelona Institute of Technology for the Habitat (BIT Habitat).

Without a doubt, La Taula Eix IV will be a partner of Biciclot and the Bike Hub for the promotion of l’ESS initiatives, in a neighborhood where many unused buildings and plots are in the hands of compensation boards of various owners. The purpose of Taula Eix IV is to utilize, even if only temporarily, these underused spaces, and fill them with cultural projects that represent the social economy that arise from citizens’ initiatives. This platform has already mapped the possible spaces to use and has identified more than 20 initiatives interested in setting up in the district such as: community urban gardens, construction of equipment and green areas to cover health needs, and educational and leisurely activities such as the following: CAP , institutes, parks, spaces to practice sports, toy library, and a public swimming pool.

Greenevents is a social economy entrepreneurship that designs and organizes Sustainable Experiences in and around Barcelona: Team building with Social and Ecological Positive Impact, Corporate Volunteering, On Site Corporate Social Responsible (CSR) Activities and Sustainable Events.

We understand Sustainability as a participatory process to build an equitable society, with basic socio-economic covered for everyone, where economic impact does not damage the environment.

– The prices do not include IVA.
– We can make your budget according to your needs.
– Booking policy: 50% of payment must be received at least one month in advance; other 50% can be received on the day of event.
– In case of any cancellations justified because of Covid19, and you cancel at least one week prior to the event, we will consider giving you back a percentage of the first payment.
– If it rains, the event will be scheduled for another day.
– If you are a Spanish Company, you can reward some of our team building experiences as training like Poblenou Sustainable Tour or Learn about traditional Fishermen work. You also can reward any of our workshops on organizational strategies, assertive communication or your company’s CSR; or any of our CSR Activities.
– Greenevents has a security protocol to prevent the spread of Covid-19 in our experiences.
– We will ask you to sign a document that states that Greenevents won’t be responsible for any participant that gets Covid-19 after our event.